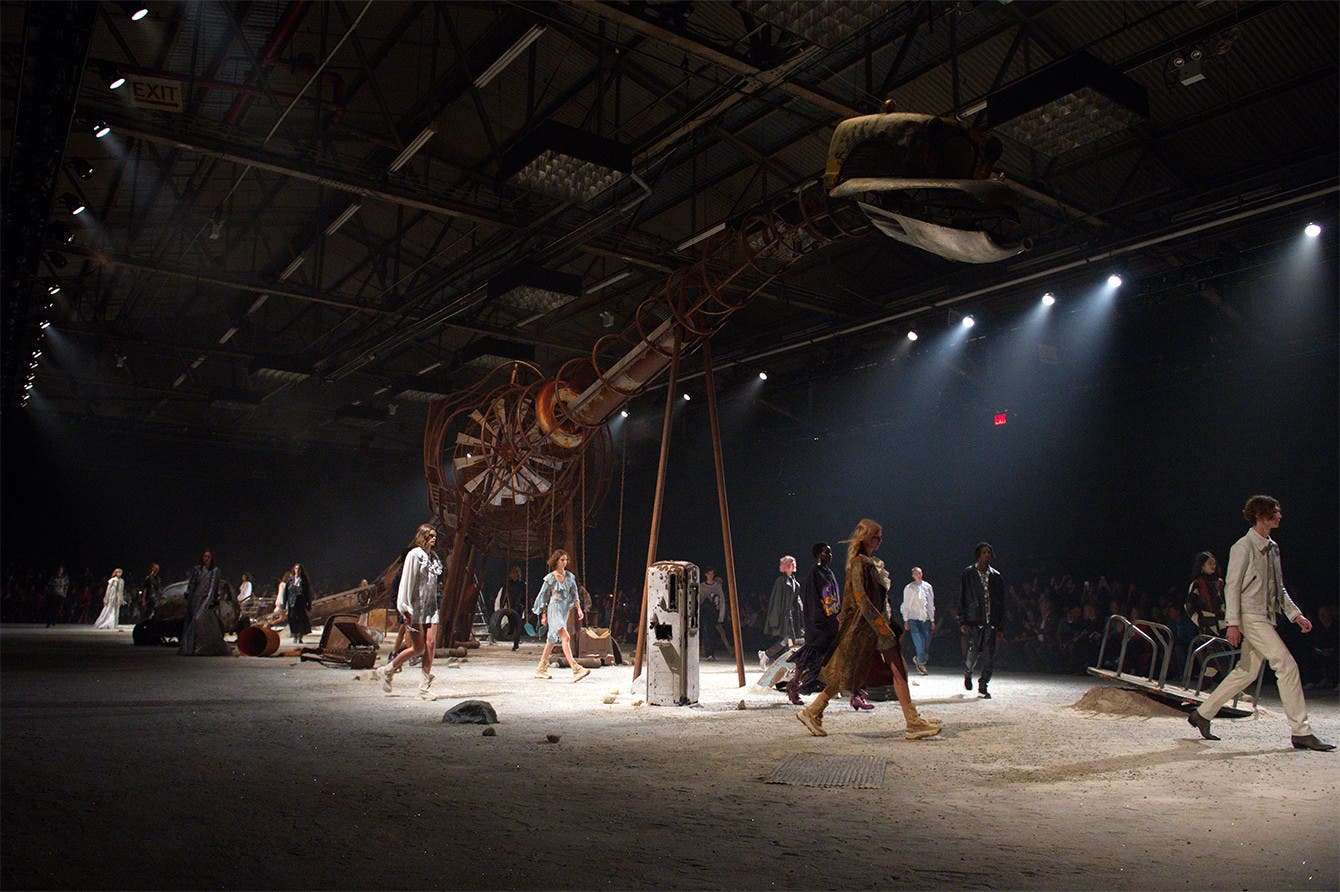 Pioneer Spirit
Stuart Vevers is celebrating trailblazers of the American West, inspired by trips to Disneyland, Santa Fe and the COACH archives.

COACH creative director Stuart Vevers may hail from Yorkshire, England, but he is a true Disney fan. He's been to all the amusement park locations around the world, except Shanghai. "It's something so transportive when you walk through the gates and onto Main Street, and I totally give myself up to the experience," he confides. "I actually went to Disneyland about a month ago with my four-year-old godson." He's quick to note that It's a Small World is his favorite ride—he goes on as many as he can—Snow White is his favorite film and Mickey Mouse is his favorite character.

This was the first season that the Disney x COACH union (the fourth) appeared on the runway. The emphasis for spring was on the animated animal characters from Dumbo, 101 Dalmatians and Bambi, but through a moody lens. A sweatshirt featuring the Aristocats was "definitely the piece that a lot of models backstage were excited about," says Vevers. On COACH's cool cast, which included Kaia Gerber, Adesuwa Aighewi and Dree Hemingway, Dumbo shirts seemed like rare charity store scores.

First appointed in 2013, Vevers looked to three pioneers of the American West—cartoonist Walt Disney, artist Georgia O'Keeffe and designer Bonnie Cashin—for the new season. "The COACH guy and girl have a real sense of individuality, and I always see them as customizing their look," says Vevers the day after his show, which was staged at New York City's Pier 94 amid rusted-out relics. "Whether they're pulling quite an eclectic mix of references together with a biker jacket or putting on patches, it always feels quite personal. This season we took it one step further with this idea of salvaging American heirlooms."

The show's front row hosted pop culture mavericks like photographers Petra Collins and Tyler Mitchell, brand ambassador and collaborator Selena Gomez, rapper Vic Mensa, and trans activist and actress Dominique Jackson. "Seeing our guests yesterday, the way they put together their COACH pieces, it was so cool," Vevers enthuses. "Jon Batiste looked great. I saw GoldLink, who wore the Selena [Gomez] collaboration mixed with some of his own clothes—he looked awesome."

A trip to Santa Fe influenced the collection's sunbaked hues and prairie silhouettes. "I did the Turquoise Trail, which was like stumbling across little communities that had really interesting aesthetics. A bit of that kind of cultish, moonchild feeling," he explains. He also went to Georgia O'Keeffe's Ghost Ranch, which he says, "was so beautiful and almost alien. It felt like you could be on another planet." O'Keeffe's colors and her own idiosyncratic way of mixing dark tailoring and flowing silk dresses seeped into COACH's spring assortment.

Vevers finished his trip to New Mexico with some nightlife. "We discovered a cool spot called El Matador, which was a dive bar underground that had great music and a really cool scene, quite a young crowd mixing sportswear and cool biker jackets with bits and pieces of Western gear. All those things combined gave us a great starting point for the season."

But New York City is the backdrop for every COACH collection. "I always see our girl and guy as having a lot of New York attitude," he says. Although spring is "this mix of the romance and nostalgia of the prairie with the toughness of New York City."

Back in New York, Vevers had an encounter with California girl and former COACH designer [1962-74] Bonnie Cashin's work. Cashin was a true fashion pioneer, particularly in the '70s, and is credited not only with many of the brand's signature hardware and handbag styles, but with the very concept of layering.

"When I first joined COACH I deliberately wasn't referential, because I felt it was important to look forward boldly to create a new vision and signal change," Vevers says. "But as the COACH girl and guy have become more established, I've felt I can explore the archive and bring that into their world." For the first time, Vevers revisited designs from the house's 77 previous years. He chose to re-create Cashin's double- and triple-frame handbags. "I think Bonnie Cashin was a true visionary, so to be able to reference her work is super amazing."